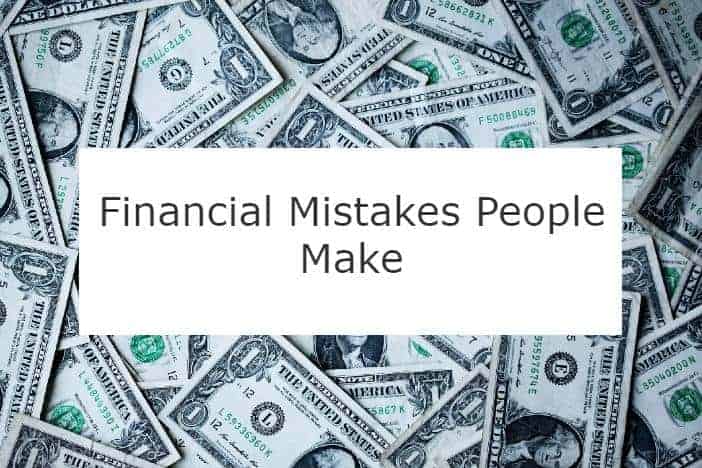 People make serious financial mistakes that ruin their finances, sometimes for a long time, and sometimes forever. These mistakes are so grave that it could make them put up their homes for sale and become homeless.

One of the serious financial mistakes people make is not taking their retirement saving seriously. There always seems to be more time until retirement suddenly comes on them.

The Federal Reserve data shows that 25% of Americans have no retirement savings. And only 36% are invested in saving for their retirement.

Some people think Social Security will be enough to get by when they are too old to work, but it’s never enough. If you are yet to start saving for your retirement, you’re making a grave financial mistake that will lead to regrets. It’s time to do better.

What other serious financial mistakes people make? Take a look at the remaining seven mistakes:

Here are some of the financial mistakes people make that leaves them bankrupt. Try your best to avoid them:

One serious financial mistake people make is having multiple credit cards. Managing one is usually tasking as you get often tempted to use it for frivolities. But two, three, multiple, that’s outrageous.

A credit card is more than enough if you must have one. Using multiple cards and incurring high-interest rates is unwise. Paying the debt off could become an impossible task.

Sometimes, you may get tempted to use one credit card to balance monthly payments for another. And it becomes a vicious cycle.

To avoid this, don’t get more than one credit card or don’t get any at all. If you have one already, set a credit limit of less than $10,000 and don’t default to pay the monthly balance.

There are lots of deferred payment plans that allow you to buy stuff now and pay later. These plans can run up to three years, meaning you have ample time to pay off the debt when you wish.

But the problem is many people do not meet up the payment when it’s due. It happens more with people who subscribe to multiple deferred payment plans.

The interest rates, which are usually high, begin to count, making it difficult to pay it all. For your peace of mind, avoid such programs.

If you are saving for your retirement, you are doing a good job. But a severe financial mistake is when you dip your hands in the savings to pay for a debt.

Remember, the savings is for your future. You are not likely to get a life pension from where you are working, so this is all you’ve got for retirement.

Using it to pay a debt is not a good idea, not only because you’re tampering with your future income, but you also need to pay income tax on any amount you withdraw from your 401K retirement account. That’s not all. You’ll still have to pay a tax penalty on your regular income tax.

Sadder is the fact that you won’t earn compound interest on your savings since it has been taxed.

Whenever you consider taking from your retirement savings, remember the cons and stop on your tracks. It’s not worth it in the long run.

Look for other ways to pay off your debts, either by working extra hours to make money or tightening your budget to save some money.

The idea behind leasing a car is using it for a short time, say three months, to get around. But hiring it for 36-60 months is not being reasonable. If you finance a car for that same period, you’ll own it in the end. But with leasing, you’ll get nothing but pictures.

Why would you want to lease a car for that long when you can channel the money to financing it. That’s a grave financial mistake you should avoid.

Renting an apartment is not outrightly bad, especially if you just got a job after college or need to be close to where you are temporarily working. What’s worse is that after working for several years, you’re yet to purchase a home.

Paying rents year in year out can be a substantial financial burden on your family, especially if this goes on till retirement. Getting a down payment or mortgage could seem complicated, but if you set your mind on it and make plans towards it, you’ll get it.

The benefits of owning a home cannot be overemphasized. And before you realize it, you are done paying the mortgage, and you can channel your money to other investments to increase your finances.

These loans have a high-interest rate, could even be as much as 442% annually. You find yourself trying to pay off the debts that seem unending. Save yourself from such financial and mental stress.

You could be making a serious mistake if you decide to trade the value of your house (equity) for cash. It’s reasonable if you’re going to use the release for investments that you are sure of 100% returns. Or if you use the equity release to renovate the house to increase its value.

But if you plan on using the cash lump sum for vacations or other frivolities, you need to enrol in financial education.

People make other common financial mistakes, like not having a monthly budget, eating out instead of cooking, ignoring unnecessary bank fees, and going on an unplanned vacation.

They can rectify it with time. But the above points can put a significant dent in your financial worth. It would be best you avoid them.

Do you own a house? Check out some tax benefits you may be missing out.