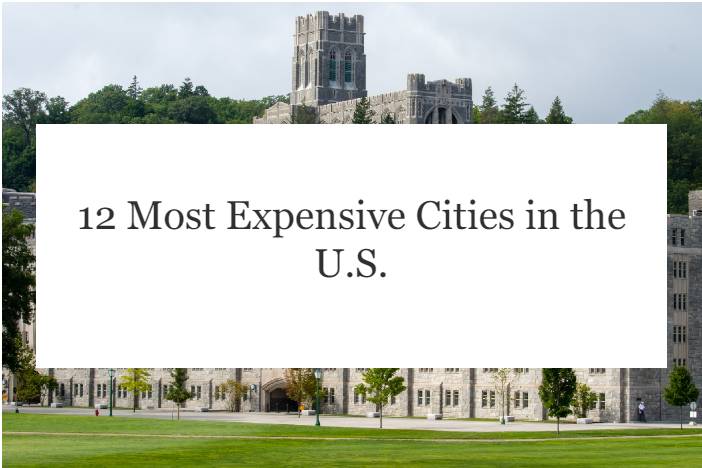 Some cities in the US are expensive to live in, while others are pretty much affordable. It all depends on the cost of living, which is the amount needed to pay for necessities like rent (or purchasing a home), feeding, utilities, and transportation.

Some of the most expensive cities to live in the US are Manhattan, Hawaii, San Francisco, Los Angeles, Seattle, Boston, Arlington, Queen, Oakland, and a few more. These cities are expensive due to their high housing price and other contributing factors.

If you want to know more about the most expensive cities to live in the U.S and why they make the list, keep reading:

The most expensive cities to live in the US

The cities listed are the most expensive places to live in America from the least to the highest:

The city is the second-largest in the country and harbors people from all walks of life, from ritzy to bohemian. It’s also a place where you can find different lifestyles from urban to suburban and beachy.

Los Angeles is the home of beautiful locations like Beverly Hills and Hollywood. No wonder it’s one of the most expensive cities to live in the US.

One major problem with living in Los Angeles is the heavy traffic. If you are relocating here for work, do well to rent a place close to your workplace.

Orange County, located in California, boasts of more beaches and parks than other cities in the U.S. It’s also less crowded compared to Los Angeles and San Diego, its bordering cities.

You’ll find the residents here surfing on the beaches, hiking, or engaging in one outdoor activity or the other. One expensive thing about Orange County is the housing prices, which are relatively high compared to other states.

Queens is one of New York’s five boroughs and by far the largest. Most people have had to move to Queens due to the high cost of living in its neighboring cities, Brooklyn and Manhattan. But due to the influx of people, home prices are also increasing.

Boston is a city that has a lot going on for it. Known for its historical roots, it’s the home to world-class universities, sports, and even a unique accent among the people.

Boston also boasts of the best seafood such as oysters, clams, and lobsters, all cooked and served fresh. The weather is lovely during non-winter periods.

The average price of homes in Boston is quite expensive. Some residents spend more than half of their household income to pay for rent. They also face the same traffic issues as Los Angeles, even with a sound transportation system.

If you are looking for jobs, especially with the government, Arlington is the city to live in as lots of job opportunities abound there. The city has one of the lowest unemployment rates in the country.

Arlington is home to many affluent and educated people, which is why it’s among the most expensive cities in the U.S. Also, the rents are on the high side, about two times the national average.

Seattle was brought into the limelight by Amazon. It’s now one of the fastest-growing cities with a significantly low unemployment rate. Due to the numerous job opportunities, more people have been trooping into the city, raising the housing price.

Oakland has always been a social community, which encourages its residents to start small businesses and urban farming. It also cares about its environment putting efforts into different sustainability programs.

The city also offers its residents numerous job opportunities. You can find many big corporations in the city, such as Southwest Airlines and Sutter Health.

However, like most expensive cities, the residents have to pay lots of money to rent or purchase homes.

You will find many young professionals working in either the government or private sector in Washington D.C. Due to the number of people relocating to the city, the demand for housing has increased. High demand equals high housing costs.

Due to the high housing cost in Manhattan, people started to flock to Brooklyn in search of affordable housing. But it was not long before the house price in Brooklyn went up too.

The residents do not even make enough money from their various occupations compared to the average American. And the poverty rate is 8% higher than the national average.

Honolulu is hands down an expensive city in the U.S. The beaches may be lovely, but everything is costly, from the food to electricity, renting and purchasing homes.

The foods are expensive because they ship them into the area. The government is working to ensure food is grown in the state.

The salaries paid in San Francisco goes hand in hand with the high cost of living. The city has various industries from technology to financial, and even tourism.

As a result, the job opportunities are numerous, attracting lots of working professionals and making house prices go up. The residents have been forced to leave the city in search of affordable houses.

The most expensive New York borough, which is also the most expensive city in the U.S, is Manhattan. Everything in the city is costly, especially the housing. Residents of Manhattan are incredibly wealthy. The poor and average can barely survive.

If you’ve read this article carefully, you’ll notice that housing makes most cities expensive. And it happens when there is an influx of people in that city.

Two things that make the cost of a house rise are either:

The landlords feel they can charge according to what people earn (most of the residents in expensive cities earn high salaries.

The demand for housing is so high that the few remaining gets scrambled for. And when demand is high and supply stays the same, the price will increase.

There you have it. If you consider visiting or permanently staying in any of these cities, be prepared to spend and spend. Sure, you’ll get the jobs as with most cities, but you’ll have to pay a lot to live comfortably.

What Others Are Reading